More Bible Costumes / Trunk or Treat Ideas that I like!

I posted earlier here about the decoration idea that I'm going to use on my van for Trunk or Treat at our church this year.

While I was searching around online I found a lot of other really great ideas too. So I thought I'd post them in case anyone else needed ideas...

So here's some of the other ideas I found:

Guitar Hero - God's our hero - This could be a really cool theme...Dress up as rockstars, and carry guitar hero guitars, but with a God's our Hero sign

D.O.G - Depending on God - Could be done like my F.R.O.G idea but with a dog theme instead 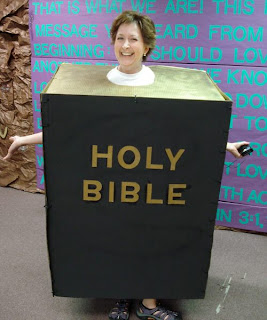 Books of the Bible:

Numbers -Carry a book, and attach a bunch of cutout numbers to your outfit
Romans -Easy to make with a sheet and some leaves. Carry a book
Hebrews -Have a man carry a book and a coffeepot...He-brews..get it?
Embarrassing to admit, but it took me a minute...lol

Noah and the Ark - I loved this one! 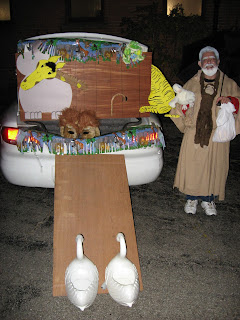 Jonah and the Whale - really really loved this one! 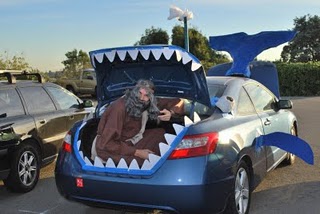 You could also wear a bathrobe, look really messy, and stick clumps of “seaweed” (green yarn) all over with a fake fish or two thrown in.  Hold a sign that says, “On my way to Ninevah!”
and you’re Jonah thrown up from the whale! lol

Delilah - Dress as a glamorized hair dresser.  Make a big pair of scissors cut from cardboard and wrapped
in aluminum foil.  Stick some sparkly jewels on the scissors for added pizzazz
Walk around all night going after the boys’ hair!  Judges 16:4-21

Queen Esther -Wear a crown and a beautiful queen’s outfit. Her story is in the book of Esther.
What a great role model for little girls! 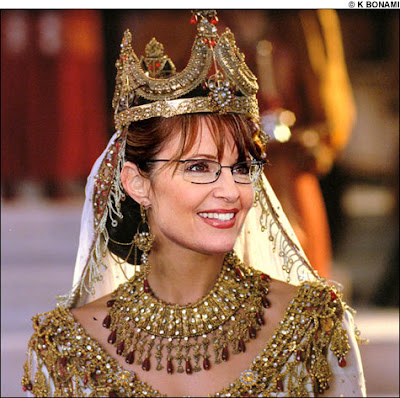 Put on your coolest spy gear,  and you are Joshua and Caleb.
Read about their ultimate spy mission in Numbers 13-14

Wear a red shirt with a big letter ‘C’ on it!  You are the RED SEA! - Great simple idea! 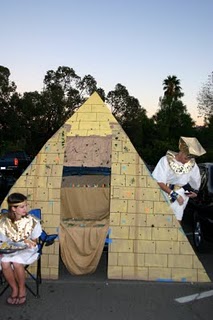 Daniel in the Lions Den 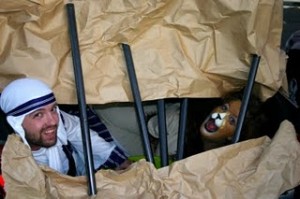 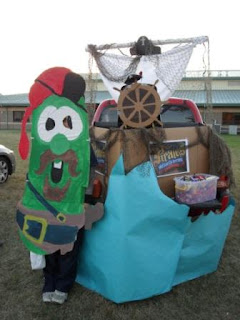 Rock and Roll- Either of the below would work great, dress up as Rockers

Reach
Out
For
Christ’s
Knowledge
&
Receive
Our
Lord’s
Love

Last but not least is the other one me and Tyler debated on doing...
The Gates of Heaven
We still possibly could do this one, but I really think we are going with the FROG idea since it'll be easier and cheaper to throw together....We can always this one next year. :0)

The plan was to remove the back van seat.
Hang a shimmery gold piece of fabric from the ceiling behind the first row of back seats, and shine a light from behind so it would make it appear to glow to the trick or treaters.
We were going to get styrofoam balls and paint them with a pearly paint and use wooden skewers to make a set of "pearly gates"
On the floor was going to be pillow stuffing and our fog machine to look like clouds
Sitting in front of the gates was going to be Tyler dressed as Saint Peter (an old man in robes, carrying keys) holding a huge book (The Book Of Life)
Then I was going to be dressed as an Angel to pass out candy
I LOVED the idea, but the main problem I see is not possibly having access to an outlet to run the lights and fog machine..

Hope someone can get some use out of these great Bible costume/ Trunk or Treat  ideas!

(The pictures above are not mine, and are not being represented as my own. They are pictures I found throughout the web last night while searching for ideas. I do not have referencing sites for the photos so if you are the owner of these pictures and want them removed then please let me know. Thanks!)
Posted by Heather@Simply Mommy at 5:20 PM

I've Been Featured On